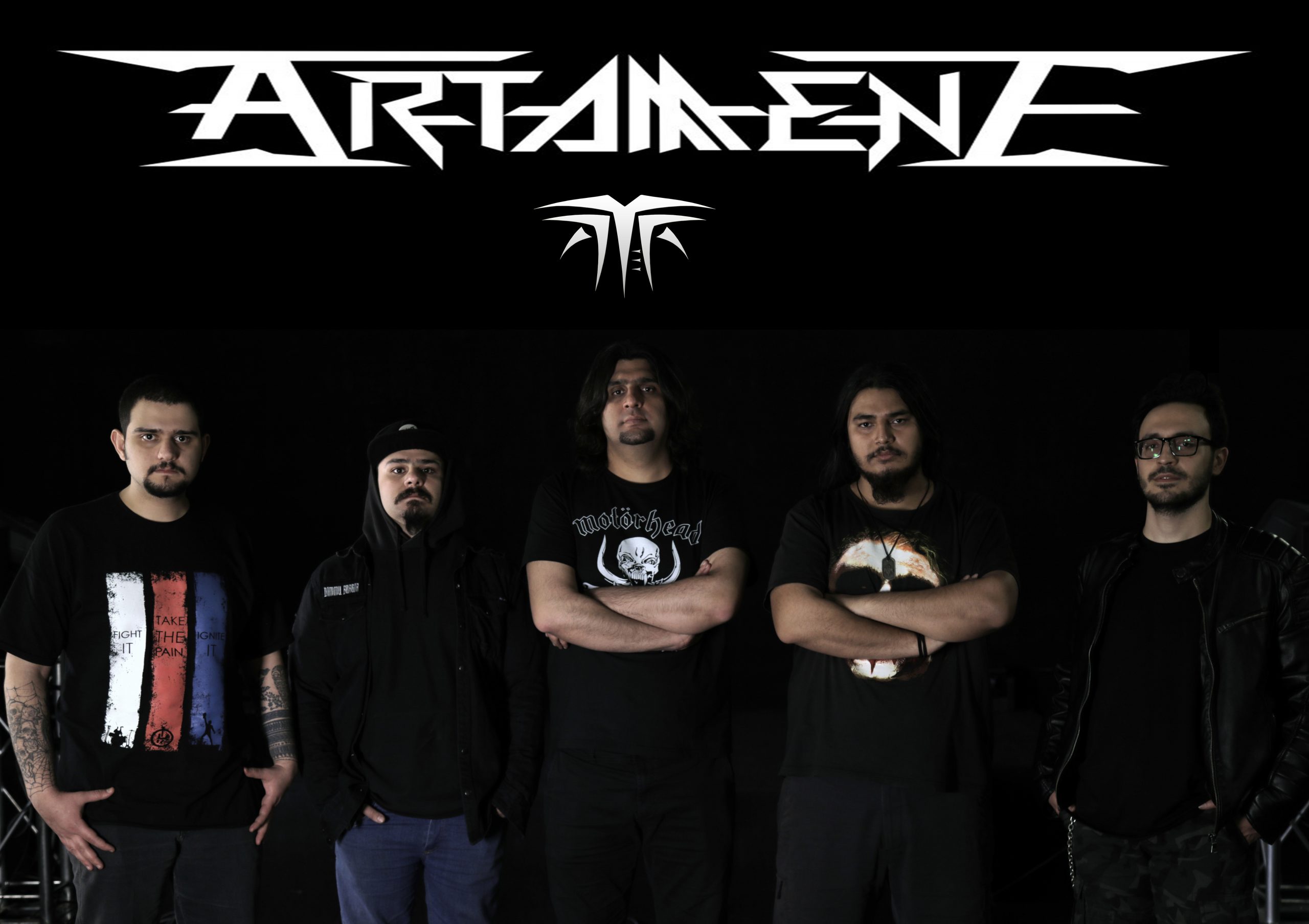 Persecution is still disgustingly widespread in the world today. There are millions of people in countries across the globe who face imprisonment, torture, and death for their religious beliefs, their ethnicity, political beliefs… the list could go on. Iran is one such country. America has experienced childish backlash against heavy metal (Tipper Gore and her Parents Music Resource Center in the 1980s as one example) in the past, but American musicians have never feared imprisonment just for making and performing metal music. This threat is real for Iranian metal musicians, and Artamene wants the rest of the world to know that awful truth.

Artamene was formed in Iran in 2017 by brothers Pedram (lead guitar) and Pooya Shitrah (drums) along with Soheil Avakh (vocals) and Ali Karimi (rhythm guitar). Their album, Ziggurat, also features Yahya Rahmani on bass. Pedram and Pooya grew up listening to and playing metal with each other, and they decided to form Artamene. The problem is the Iranian government thinks metal is inherently Satanic, and they have thrown bands in jail for making metal. Members of the bands Confess and Arsames have been sentenced to prison on charges of “Satanism,” although thankfully the musicians were able to escape the country.

I don’t hear anything Satanic on Artamene’s Ziggurat, so hopefully the band will be safe from those accusations. They are allowed to play live concerts, although the behavior of the audience is strictly regulated by the government. They actually get 200-500 people at their concerts.

The music itself is quite good. There are a lot of thrash metal elements, but there are also some more atmospheric metal moments and certainly progressive flares. Thrash metal in general often has a lot of progressive metal elements, minus the keyboards usually. On Ziggurat there are heavy distorted guitars, clean solos, and clean rhythm sections. The bass is clear, heavy, and distinct throughout. It shines in the mix. The drums are intricate and pounding with a prominent double kick, reminding me of the brilliant Gene Hoglan (Strapping Young Lad, Testament).

The vocals are heavy and distorted, but they’re not black metal vocals. Thrash tends to have its own sort of yelled distorted vocals, along with cleans. Avakh’s vocals follow that trend, and his voice works very well with the music. It helps that the lyrics are in English. At times Avakh’s voice reminds me of M. Shadows from Avenged Sevenfold.

The songs have a heavy gallop to them, and guitar shredding abounds. This would be a great band to see live. “Shining Black” is an instrumental track displaying elements of thrash and more atmospheric elements with cleaner guitars. The beginning of the guitar solo on the song could use some improvement, but thankfully the solo gets much better after the first few bars. The first bit sounds a bit out of tune. Apart from that brief moment, this track is an excellent instrumental progressive metal song. There’s even a great bass solo.

The final track, “Petrichor,” has some more atmospheric metal elements that act as a nice closing to the relatively short album. The song builds slowly without rushing, and it even features some synths. The progressive aspect of the band’s music is also shown on the second half of the aforementioned “Shining Black,” and it shows the group’s musical skill and versatility.

I also want to point out the album artwork, which fits in well with the other great artwork that heavy metal and thrash metal are known for. It reminds me album covers from Iron Maiden and Testament. Not that it is copying any particular cover, but it has that same metal artistic sensibility.

My one overall complaint with the album is the way some of the tracks end. Most of them fade out, which is common in the music industry, but less common in progressive rock. The songs on this record tend to fade out rather abruptly, which creates a bit of a harsh transition between tracks. The album is also rather short at around 38 minutes, so to me it doesn’t seem like the fading out is needed. This is a relatively minor thing that doesn’t detract too much from the overall listening experience, but I think more organic endings might help tie the songs together to help tell their story.

And speaking of the story, I figured I would let the band speak for themselves about the record’s concept:In a world in which mankind struggles with depression, betrayal, fear, and darkness, waiting for a savior to lead their way to utopia, their lives perish in empty hope. They sacrifice their lives on each step of the infinite Ziggurat staircase to keep motion in this mayhem until they reach salvation and the rain will wash their suffering away.
Let your hearts shine through this blackened earth and set out on the difficult path of breaking barriers and scaling the cliffs of prejudice. This album starts with “Infinite Escape,” which describes a man who is hopeless with no will to continue, so he took the risk to see what tomorrow brings for him and came out of his lonesome, but the fear still remains as the second track which is called “Fear of Darkness” begins. Darkness still wants to bring him back so he has to deal with the chaotic world if he doesn’t want to be the man he used to be, and that’s how the third track “Heavy Motion” begins. he has to continue his journey through the flames and the fire and save his anger for doomed men of freedom. at this stage, revenge becomes easy when they want you to be destroyed, so that is what we are talking about in track number four “Mayhem”.“Shining Black” is the next one which is an instrumental track that resonates the feeling of all we have seen and felt through this journey till now.We are at the top and we have reached “Inshushinak,” god of the dead and the world beneath (just like Hades the ancient Greek god, but he is a god from ancient Shush, an area in Iran). Now we have seen everything. we are at the top of the world and it’s time to fall down and join the almighty Inshushinak.
Death is near! That’s how the two next tracks at the end of the album begin, “Rain of Paradise” and “Petrichor” –
it’s time for rebirth, a new life, a new start. and that’s how life goes on.

Ziggurat is based on Iranian ancient mythology where we tried to show human life in the era that we are living, especially ourselves as an Iranian metal band who are labeled as satan worshipers and accused as an anti-cultural wave and relate it to the storyline which was told.

Artamene’s Ziggurat is a blistering yet not overpowering journey into Persian mythology. The album is heavy and progressive yet still melodic. I called this “protest rock” in the title of this review because the band is protesting by their very existence. In a country where making this kind of music could get them in a whole lot of trouble, that’s true protest. Forget whatever nonsense Roger Waters is bellyaching about and listen to Artamene instead. The two singles (“Mayhem” and “Heavy Motion”) from the upcoming album are out now.