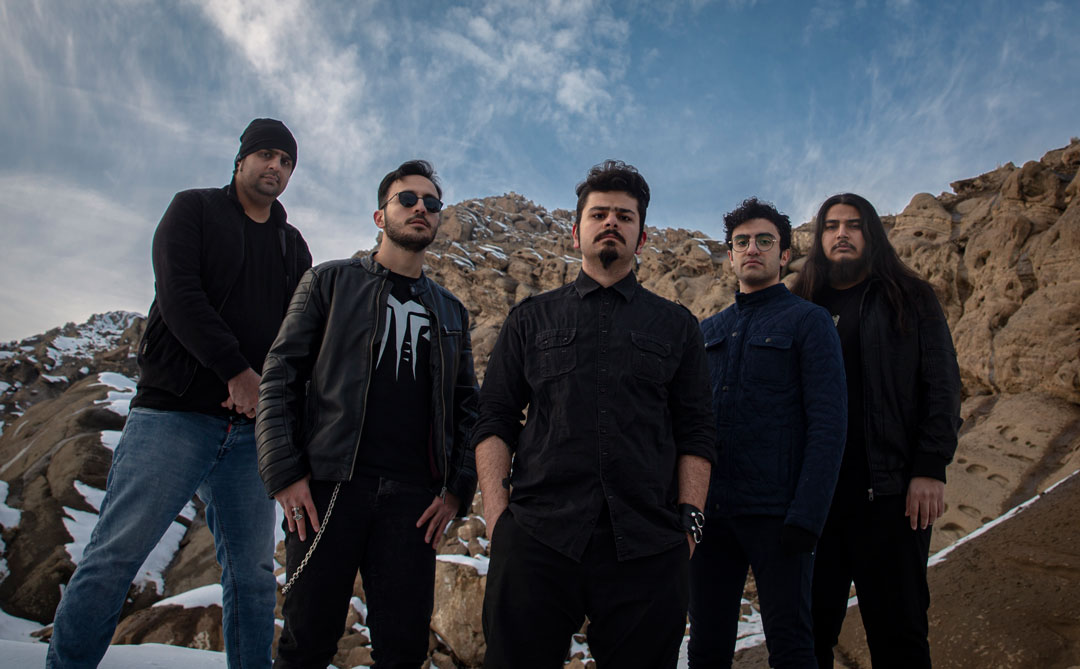 COSMICK VIEW: Hello! Welcome to The Cosmick View. Thank you for taking some time out of your day to chat with me, it’s greatly appreciated.
Artamene: Thank you for having us, it’s our pleasure.CV: Everyone band has a story to tell…something that sets them apart from the rest. Tell us a little of Artamene’s story and journey to the present.
Artamene: Artamene was formed by brothers Pedram and Pouya Shitrah as guitarist and drummer back in 2016. Jamming around with friends, they finally decided to make it official when Ali Karimi and Soheil Avakh joined the band as guitarist and vocalist as a permanent and final lineup. We were all set up and ready to play live but it wasn’t easy to get legal permission to do that. As far as we can remember there has always been negative advertisements about Heavy music which related us to Satan worshipers, bunch of trouble makers, junkies who are rejected by society and chaos, psychopathic people and etc., so we had to deal with people who think like that and even risk imprisonment. You could say we “set out on a difficult path of breaking barriers and scaling the cliffs of prejudice”…that’s our slogan.

In the beginning we even had difficulties singing live in English, but we never gave up, because it was not just a matter of playing live, it could become an evolution for all those who are Metal fans. So as a society we would have a word to say, that’s the dream we have. CV: Do you see Artamene’s story as one that could ultimately find itself as a tale of woe and caution or one more suited to be classified as an inspirational adventure for others to follow?”
Artamene: Definitely it’s a huge risk, due to the social and legal troubles we were and we are going through. We can say it was always extra hard work for us, there is also the factor of keeping up with sounds and recording technology to reach the standards of international bands around the world, so it makes it much harder. Unlike most Western and European countries, we get no support from the government, but troubles instead. It’s hard to change people mind about this genre of music, it takes years but if we don’t then who will?

Hopefully we can inspire other Metal bands and fans all over who are interested to pushed back like us, because it’s not just a music, it’s also an idea, a way of life.CV: Music is looked at differently around the world. Depending on who you ask, for some it is just background noise, for others it’s viewed as merely a pop cultural, marketing outlet to sale products, style and fashion, while others look at it much deeper, going inward with reverence and awe. How has your experience as both an artist and fan shaped how you view music?
Artamene: As a sad and confused kid it’s comforting when you can consider yourself as a member of this society. We all grew up with 80s and 90s Metal bands…we get things late here, they had to be snuck into the country before the internet and cell phone apps really got popular, even now we have to be careful, but it was never a phase, it was a way to live for us that took away our frustration and its anger and sadness, that’s the reason behind the determination with what we are doing. It amazes us how new generations still can make a connection with music that was composed 40 or even 50 years ago! So there must be something more to it than style and fashion. Culture, fashion and style come in second place, if the music itself can touch you.

Every artist wants to become famous and make a life out of his/her art but beside that Metal goes deeper and it should have a meaning to respect all the qualities.    CV: Describe for us how the music scene is in Iran. How does it differ from other parts of the world?
Artamene: Iran as a Middle Eastern country has an old history in music; Traditional Iranian music is really rich and mysterious. Iran went through dark eras in history which affected music. We never had periods like the European renaissance to establish and improve our art in the best way. So the Ancient ways stayed the way they are.

About today’s music scene in Iran, we can say most people are fans of pop and rap music. Pop in Iran is more of a business genre that is well supported by sponsors. On the other hand classical and traditional music are like two inseparable parts of music.

Other genres like Rock and Metal music are called Secondary Wave of music in Iran which is still growing but at a fast pace. There are more fans nowadays and thanks to the social apps people can find and support each other more than ever.

If we want to compare the metal scene in Iran with other parts of the world we can say things we struggle with are different from those who work in the US, Canada, Europe and etc. We are dealing with a large gap of musical taste in people, so we have to establish this genre here to begin with. There are also lots of issues playing live…problems that you won’t believe, sometimes it takes 3 months to get all the permissions and coordinate with the government to hold a concert and sometimes they cancel the shows without telling us until right before the show. They watch us ALL THE TIME so that things only go the way they want them to be. Fans have to sit on their seats till the end of the show and no devil horns, no standing and shouting lyrics and singing along, bands are not permitted to headbang or mosh while they perform. They make all this so hard in order to frustrate us, hope we let it go! But here we are to fight for our generation, for what we believe and changes that must happen.CV: Having dealt with the confines of both culture and country to live your life as a Metal artist and pursue your dreams, what perspectives do you feel you possess that others may not due to your unique circumstances? Artamene: No matter how big or small, we became a voice to radiate our thoughts and shout out our existence as a society. We are happy that now we are finally found a way to share our music with the world so they can hear us too.CV: Given such hardships to exist as a Metal band in Iran, are the songs that you write a reflection and collection of those experiences? Do you find it easier to speak through music and voice your feelings and views than it is to do so otherwise especially within the confines of restrictions and censorship?
Artamene: Of course, we not only write about what we are dealing with, but all the people of Iran and maybe everyone around the world who have feelings like us that we have described in our songs. We have written about oppression, sadness, anger, chaos, cruelty, injustice, depression, redemption and salvation. So these songs are radiations of our life and thoughts which we are dedicated to.

We like to work free as an artist and produce our music without any fear of getting in trouble or being arrested or being questioned about what we do. It’s like a dream having a scene for this genre of music to feel safe and get supported to produce art and get what artists really deserve. There are lots of great artists here who have the same problems as us.   CV: The music industry is a very competitive and oversaturated career field. What do you believe drives Artamene to create its specific style of Metal music? How do you see both the band and its music setting itself apart from such competition?
Artamene: With everything that we deal with and as a Middle Eastern band with a Western genre of music, we are far from all that happens in the centre of Western music with a whole different story…it gives us a specific style. Believe me, we are not just another metal band like the others who wants to just prove itself to the others. Everything that we do and deal with, as far as we see, is different from the others. Everything from landing the right equipment, writing, recording and performing is a fight…its real for us, not just words on tape.
CV: What are you hoping listeners come away with after hearing Artamene?  Is there a message you wish to convey to them
Artamene: Absolutely, there’s always a message. “Mayhem” is the single out of an eight track concept album, the whole story on the artwork of the album. There’s a warrior on his knees in front of the pyramid called Ziggurat, of which there are only few left in the world and the biggest one is in Iran. It’s an ancient Elamite complex in the Khuzestan province of Iran founded 1250 BC. The story line for all these tracks continues until track 6, “Inshushinak.” where the warrior dies when he reaches the top of the pyramid. Inshushinak, in folklore, is the god of darkness, death and ruler of the underworld much like Hades the Greek god.It is a reflection of the struggles of modern man today, in an ancient historical way. We tried to make it that you can consider the whole story as a movie playing in your mind.CV: In addition to a new album coming, else can fans expect to see coming from Artamene in 2021?
Artamene: We are working on new music videos for new singles that will be released soon before the whole album is dropped. Besides that, we have to see were we go with COVID-19, if things get better then we can also think about live shows again.CV: Thank you again for spending some time talking and sharing with our readers. It was such a pleasure. I wish you all the best.
Artamene: It was a pleasure for us to share and talk with you and all your readers. We are excited to see the feedback of those who will read this and let us know their ideas.Check out Artamene at:
Spotify: https://open.spotify.com/artist/568SWEIeS0xF7754uDvXPy
Instagram: https://www.instagram.com/artamene_official
Facebook: https://www.facebook.com/Official.Artamene/
Youtube: https://www.youtube.com/watch?v=C1P6n5PZ6xM

The Cosmick Voice
Music, Talk & Nothing But Business
www.thecosmickvoice.com
www.anchor.fm/the-cosmick-voice